Modern karate was first demonstrated in Japan in 1922 by Gichin Funakoshi, the founder of modern karate. However the history of karate stretches further back than this to the Ryukyu Islands off the coast of Japan, today known as Okinawa. In these islands the predecessor of modern karate Okinawa-te was performed. The origins of Okinawa-te are not fully known but it is believed that some of the influence for this came from China and its development brought about by the ban of weapons in Okinawa in the 15th century. There were two main styles of Okinawa-te, Shuri-te (Shorin) and Naha-te (Shorei). Shorin was the style practised in Shuri (Shuri-te) and Shorei was the style practised in Naha (Naha-te). Styles of karate such as Shorin-ryu where derived from Shuri-te, whilst styles such as Goju-ryu were derived from Naha-te. Gichin Funakoshi was born in Shuri in 1868 and studied karate under the Okinawan karate msters Yasutsune Azato as his only student and his close friend Yasutsune Itosu. His other instructors included the Okinawan masters Arakaki Seishō and the famous Sōkon “Bushi” Matsumura, Chief bodyguard to the Okinawan  King, Sho Tai. It is often said that Gichin Funakoshi merged Shorin and Shorei to form his style of karate which became known as Shotokan. However Gichin Funakoshi never studied Naha-te and all of the kata which he eventually included in Shotokan were from Shuri-te suggesting that the combination of these styles is not correct.

In 1922 Gichin Funakoshi travelled to mainland Japan to give a demonstration of karate to the All Japan Athletic Exhibition in Tokyo. Soon after this demonstration he was asked to give a demonstration at the Kodokan Judo Hall to Jigoro Kano (The founder of Judo) and his senior instructors. This demonstration was well received. This was a turning point in the history of karate and helped lead to it’s introduction into Japan. Soon after this Master Funakoshi was able to start teaching karate in a small dining hall in the Meisojuku. Gichin Funakoshi continued to teach karate and after a couple of years he began teaching at other institutions and karate clubs were opened at several universities. During this time karate was changed and made more Japanese to encompass concepts such as Budo. Also the name Kara-te was changed from the original meaning of China-hand (the character for China originally being Kara being changed to mean empty) to Empty-hand and the kata renamed. The Shotokan of this time was different to modern Shotokan encompassing a large number of throws which were eventually removed from the style.

Shotokan continued to develop and in the mid 30’s Gichin Funakoshi had more or less retired and handed control of his Dojo’s to his son Yoshitaka also known as Gigo. A large number of the changes to the original Shotokan style which led to the modern style of Shotokan are attributed to Yoshitaka. In 1939 due to the success of the clubs a new central dojo was formed and opened by Master Gichin Funakoshi, over the door was hung a plaque which read “The hall of Shoto” – Shotokan, Shoto being the pen name Gichin Funakoshi used to sign his poetry meaning “waving pines”.

During the Second World War Yoshitaka was killed and the Shotokan dojo destroyed. After the war Japan was devastated and Japanese martial arts banned by the occupying allied forces. During this time some of the senior students of Master Funakoshi began to reorganise karate and get the ban on karate lifted under the guise that it was Chinese boxing, therefore from the end of the war until 1949 karate was the only martial art that was allowed to be taught in Japan. In 1949 the Japan Karate Association was founded with Master Funakoshi as the chief instructor and the late head of the JKA, Master Masatoshi Nakayama on the committee as principal active instructor. Master Funakoshi died in 1957 at 89 years of age. 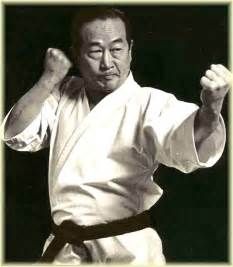 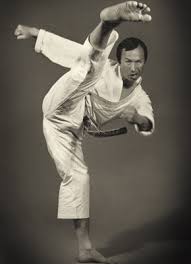 One of Master Nakayama’s students, the late Master Keinosuke Enoeda as part of the JKA’s policy to introduce karate to other countries came to England in 1965. He settled in England and later became Chief Instructor of the Karate Union of Great Britain a position which he kept until his death in 2003 when he was posthumously awarded the rank of 9th Dan.

One of his students a young karate-ka by the name of Cyril Cummins would later go on to form Birmingham and Halesowen Shotokan Karate Club and eventually reach the rank of 8th dan after many years of dedicated training. Today Birmingham & Weoley Castle Shotokan Karate continues this legacy under the guidance of the late Shihan Cummins’ students.