Due to a increase in class size we are adjusting the start times for the Wednesday night class at Longbridge Methodist Church. This is so that we can ensure all students get suitably focused tuition for their grade.

The new times starting this week will be:

There will be a small Christmas Party in the back room of the Weoley Castle dojo on Thursday 19/12/2019. Training will be as usual for those wishing to train in the front room.

The club will reopen for training on Saturday 4th January 2020 at the Longbridge dojo.

Wishing you all a Merry Christmas and Happy New Year from everyone at BWCSK.

The Weoley Castle dojo will be closed on Monday 27th May 2019. All other classes are running as normal.… Read the rest

As the Easter week approaches we would just like to let you know that the club will be closed from Thursday 18th April 2019 (Maundy Thursday) until Moday 22nd April 2019 (Easter Monday) inclusive.

Happy Easter from everyone at BWCSK.… Read the rest

With the recent changes to the club name and badge it seemed the perfect opportunity to offer the opportunity for club members to be able to purchase club embroidered gi and over-gi. These were officially unveiled this week and expertly modelled by Mike and Faye in the videos below.

If you wish to purchase either an embroidered gi or over-gi please speak to Sensei Sue.… Read the rest

The New Year, 2019 has arrived and with the new year comes a fresh start for the club with a new name and new club badge. We will still be teaching and practicing the traditional Shotokan karate that was taught to us by Shihan Cummins but under the new name of Birmingham & Weoley Castle Shotokan Karate (BWCSK).

As many of you may know after the death of Shihan Cyril Cummins 8th dan, his club Birmingham & Halesowen Shotokan Karate Club was reunited with the club that started from it’s lomgest running dojo Weoley Castle Shotokan Karate Club under its new Chief Instructor Sensei Susan Hession.… Read the rest 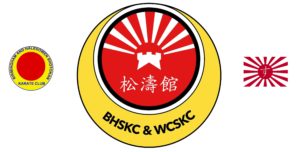